Review of OpenVAS for Security

OpenVAS is a framework that supports the reporting and scanning of your system vulnerabilities. Check out this guide to learn more about it! This article is about the review of the OpenVas for Security which aims to be capable of performing local and remote security checks.

The never-ending destructive attacks of hackers allow them to make their way through networks. Therefore, System administrators need a way to identify vulnerabilities in a consistent and simple way.

If users have a simple way of identifying security problems by running a series of automated checks, wouldn’t it be nice??

“If you prefer to travel light and free, try OpenVAS, a GPLed fork of the Nessus scanning tool”.

There is a popular and powerful tool for security analysis called OpenVAS. OpenVAS stands for Open Vulnerability Assessment System. It aims to be capable of performing local and remote security checks.

OpenVAS scans computer networks for the presence of known security problems and discovers potential bugs. It is also a web vulnerability scanner. One can have the power of OpenVAS by using a User Interface tool called GreenBone. 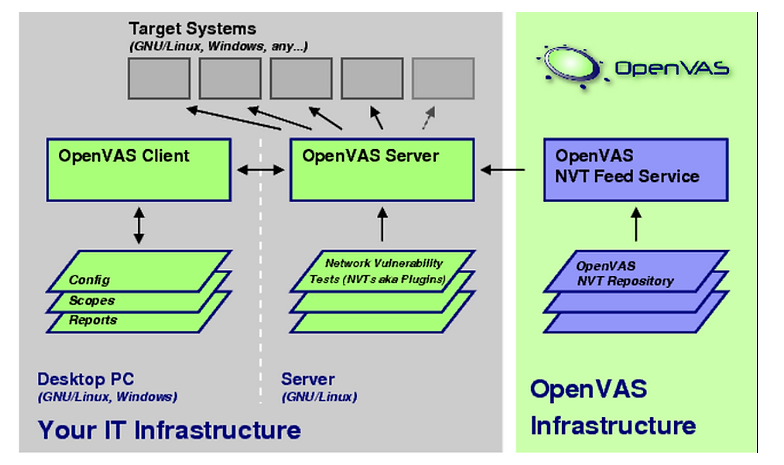 OpenVAS is a framework that supports the reporting and scanning of your system vulnerabilities. One can scan his/her system, and OpenVAS gives a variety list of security issues in detail. It organizes the information efficiently and also offers important details on the problems and what to do about them.

You may also like to visit the security of your web application.

OpenVas is an open-source tool with a Linux environment. Its security scanner is available to download as a virtual appliance and in some security toolkits, it is included.

OpenVAS is often tied up with some other security tools into specialized security–themed Linux distribution. It can save you time as it has a dedicated security distribution.

You have readily available more tools depending on what you turn up with your analysis. one of the most popular distributions named Kali Linux is preinstalled with OpenVAS.

With the passage of time as the IT infrastructure complexity increases, more vulnerability scanners become indispensable. If you don’t feel secure in retaining professional hacker consulting services, then you might to use OpenVAS for detecting vulnerabilities.

Scanning the ports on your network regularly prevents intruders from sneaking in. when scanning the network, hackers look for open port exploits. Therefore in the case of exploiting websites openVAS scans all possible versions of the web server and shows the vulnerable paths. But if you are having more servers like hundred of servers then you definitely need professional help. OpenVAS Beta test is targeted at experienced developers and users of security solutions.